To say that this year has been crazier than most for our family of 6, is an understatement. I think we went 4 and a half months with a doctor’s appointment every week, on top of the girl’s individual weekly therapy appointments. Many weeks we had 2 additional doctor’s appointments per week. At least one week a month, we had a doctor’s appointment every. single. day. And several times, we had more than one appointment a day. Looking back, I have no idea what kept us going. It was exhausting, both mentally and physically, for the girls and for Mike and me. But with Sophea’s heath declining, we did what we needed to do.

In the midst of the multitude of appointments, within the span of a day and a half, we learned that Sophea was in night-time respiratory failure, that spinal fusion surgery was in her near future, and we received her genetic results with her diagnosis of SEPN1 (a rare form of Congenital Muscular Dystrophy). As we were mulling over this information, I was beginning to see posts from a newly acquired facebook friend about *Make-A-Wish. This piqued my interest, and the timing of these posts couldn’t have been better!  I researched it further, and filled out an application to see if Sophea would qualify. She did! Within a couple weeks, we had a 2 beautiful Make-A-Wish volunteers at our house, giving Sophea the opportunity to make a wish!

If you recall my previous post, Sophea was accepted for a Caribbean Cruise. As we were preparing, for the cruise and for her surgery, we came to the conclusion that we were unable to make the cruise happen before surgery. Sophea had the option to decide if she wanted to have the cruise to look forward to after surgery or if she wanted to choose another wish from her list. Sophea called one of our Make-A-Wish volunteer coordinators herself, and pleaded to choose another wish from her list because, ultimately, she wanted to go before her spinal fusion surgery. Originally, the coordinators were concerned that she may be “settling” for her second choice wish, but Sophea convinced them that waiting until after surgery would be settling. I greatly appreciated the MAW volunteers’ concerns; it only further proves how caring they are. Sophea was positive that she wanted to go before surgery, since we don’t have a clear idea of what the lengthy healing process will look like. In her mind, going on her wish trip beforehand was best since she is fully aware of what her current limitations and mobility will allow. 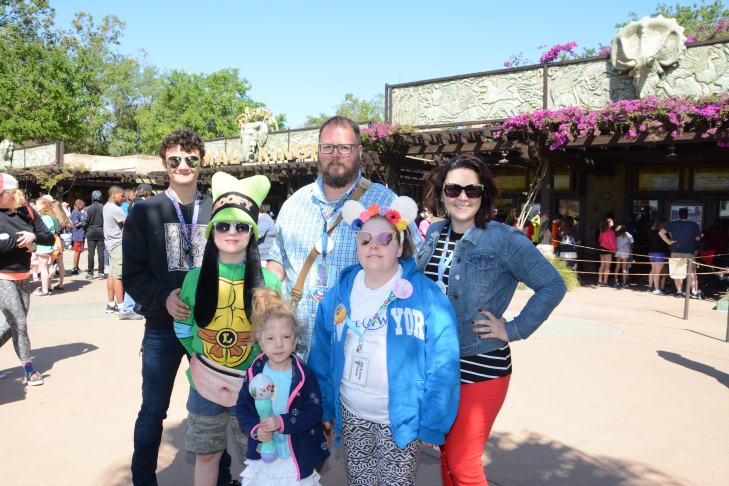 Sophea’s next choice on her list was Walt Disney World! I can’t say that this was ever a “second” choice. From the beginning it was pretty much a tie between Disney and a cruise. The only reason she initially decided on a cruise over Disney was because, as I mentioned, Sophea is aware of her limitations and she knew that the cruise would have more opportunity for relaxing, and sleeping in. (She wasn’t wrong!)

Within a week and a half, of deciding to move forward with Disney, we learned we would be leaving in 9 days! Make-A-Wish really does work magic!

On Sophea’s very first plane ride, the flight attendants made an announcement, drawing attention to Sophea as a Wish-Kid on her Wish trip, while presenting her with a crown made of airplane pretzel bags and heart-shaped picks. All the passengers clapped, and Sophea’s smile blossomed! After we landed, she met the pilot and was allowed to sit in the cockpit of the plane. Already, magic was happening and joy was created for my girl, before the trip even began!

Upon arrival to the Orlando airport on St. Patrick’s Day, we were greeted with a *Give Kids The World volunteer holding a big sign that said, “Welcome Sophea”.  At that moment, we knew this was the PERFECT Make-A-Wish trip for Sophea!! It’s highly unlikely that she would have received this amount of special attention on the cruise. The last minute switch absolutely worked out in our favor; I’m convinced it turned out EXACTLY how it was supposed to. The GKTW volunteer took our luggage and led us through the airport to the rental car area. After we had our rental van, he gave us detailed directions to Give Kids the World Village and presented Sophea with a special GKTW bag, stuffed with goodies for her and her family.

Both Make-A-Wish and Give Kids The World go above and beyond to ensure that the Wish-Kid (and their family) is showered with love, special attention, and gifts. I will never be able to adequately describe how incredible this experience was for Sophea and for our family. Instead, I will share what I learned from this experience:

*Give Kids the World is a special resort in Kissimmee, Florida. It is separate foundation of Make-A-Wish, and equally incredible! In short, the founder of GKTW, Henri Landwirth, was one of the first hotel owners near Walt Disney World when it opened. Because of this, many wish-granting organizations would call his hotel and request a room for a child battling an illness- to which he would always reply, YES! One day, he noticed a wish-room reservation was canceled, because the child had passed away before the room was available.  (It took about 2 months for a room to become available.) He never wanted to hear about another child losing their battle before their Disney wish was granted, so he set out to find volunteers and donations and created Give Kids The World Resort. Now, if warranted, the waiting period could be less than 24 hours! (This is a very shortened version, and it is very much worth learning more about Henri Landwirth!!

Ok, readers! We have a little less than 2 weeks for Sophea’s surgery!! Does anyone have or know of where to find any of these items to borrow (or rent), while she heals?

-a recliner that lifts you out and reclines almost completely.

-a seat that attaches to the toilet, with handles.

-a step stool to help her get into the van.

-a shower chair (we have a free standing shower – our bathtubs are separate.) (My grandmother may already have this for her to borrow.)

-a removable shower head with decent pressure for rinsing her hair in the shower. (I know we can buy one fairly inexpensive. I’m just asking for recommendations here! Our shower doesn’t have great pressure and I only recently got a new shower head installed (Thank you, Martin!) that allows decent pressure – we have thick hair and pressure is essential for rinsing.)

Published by Embracing the Rain

View all posts by Embracing the Rain